THAT'S RIGHT! IT'S A FAWKING POST!
Yep, another attempt to get back into a posting groove! Who knows if it will work haha. 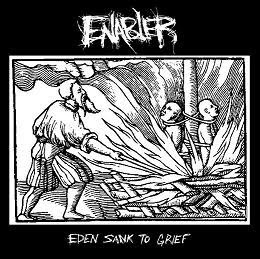 I was drawn to post something by this incredible band, Enabler, who I got to see twice last week and was completely won over by them. Featuring members of Today Is The Day, Abaddon and Trap Them, this Milwaukee band is a smorgasbord of extreme sounds. Sludge-thick guitars are played at hardcore/grindcore intensity and crust punk rawness, with screams that savagely pierce ears. You can hear that they were just as influenced by early 80s d-beat/crust punk as they were early 90s Swedish death metal. Into that mix, the occasional atmospheric reverbed guitars are constructed in allowing for a brief touch of melody. They do this without loosing the grind as fuck feel that permeates this music. If you get the chance to see them live, please do for they are a great live band!

Enabler - Fucking Wartorn
Posted by boblovesmusic at 2:52:00 AM 1 comments