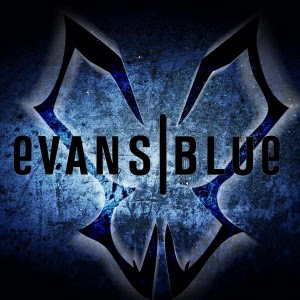 A fellow metal/music blogger buddy of mine was asked to review this alternative rock band Evans Blue. Not exactly the most exciting thing to review for a metal person, but apparently he'll get more metal things. I decided to support my buddy and post something by this band even if it means my metal cred takes a nice clean dive, but then again my metal cred often takes dives (ie Attack Attack!).

So who exactly is Evans Blue? They're exactly what you might expect when I say they're a radio friendly, post-grunge/alternative hard rock band that sounds like every other radio friendly, post-grunge/alternative hard rock band ever to come out in the late 90s and early 00s. Think TRUSTcompany or Chevelle or 10 Years. They're far from the worst band out there, they do their thing well. Their new vocalist has a good voice for this style; powerful, clean and melodic with just a touch of angst (not too much), plus he can scream/shout when he needs to (again not too much). I'm a sucker for song intros with reverbed/effected guitars. The chorus is what you'd expect, a grand chorus that's meant to be sung along at shows and while you're driving along listening to your favorite alt. rock station. Again, it ain't awful, but they are generic as fuck and bland haha. Oh well. Anyways, take a listen for the fun of it!