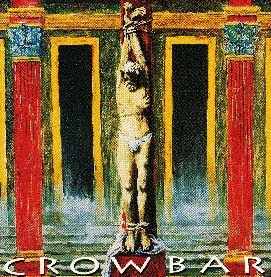 Last week I was introduced to the mighty Crowbar, tearing it up at the Middle East. It was an all star night of sludge with two of Boston's best locals (who will most definitely be featured soon) plus Georgia's bearded sludge kings Black Tusk. I understood why Crowbar was one of the big influences/founders of the style known as sludge metal. The riffs were super heavy and thick with a slightly bluesy tough, Kirk's voice was the most gruff and rough I have ever heard (dare I say like an angry grandfather haha), the pace of the songs ranged from prodding doom to almost speedy thrash. The term sludge made sense for them, it was literally the musical equivalent of walking through a muddy swamp. An aggressive and violent walk at that, appealing to hardcore kids and metalheads alike. The show kinda reflected this feeling for it was a completely packed and squished show, impossible to move around, especially when the moshpit happened. Anyways, here's a track from Crowbar's 1993 self titled album. Hopefully this makes up for the fact I haven't posted any true sludge yet!

Email ThisBlogThis!Share to TwitterShare to FacebookShare to Pinterest
Labels: Sludge Metal, US