In true unpredictably predictable Wren fashion, I am attempting to restart my lil' blog with a play on a recent meteorological event. Even truer to myself, I'm posting a really really cheesy song that most true metalheads will find repulsive. Ain't I a stinker?

The biggest snow storm of the century has come and gone. This mammoth storm dubbed Nemo by scientists and media caused all sorts of excitement, including a driving ban which has caused me to be happily trapped at my home in North Grafton surrounded by 28.7" of snow. That is a shit ton of snow right there! 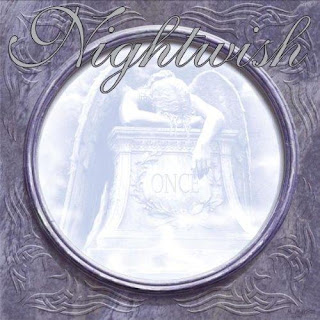 Anyways, the name Nemo reminded me of an old favorite song of mine by one of the first metal bands I got into when I was first venturing out into the heavy music realms. I remember first discovering Nightwish randomly on the iTunes music store back in 2004 and thinking "what is this!? This is awesome!" At the time, the idea of heavy metal mixed with operatic vocals was foreign to me but man it got me hooked. I mean, Evanescence I liked a lot but this was way heavier (well, to a young metalhead) and the symphonic elements were even more pronounced. Each song was a tasty bombastic over-the-top nugget of crunchy toned goodness that digested themselves into my brain like Khan's Ceti Alpha V eels. Tarja's powerful classically trained voice was a bright and shiny gem that sparkled over the raging metal fire. Today, I realize and hear that this album "Once" is considered their sorta sell-out record, taking a nu-metal/mainstream rock turn from their usual hyper melodic and solid power metal. Even I admit their earlier work is much better and more honest then this, however you know what, this still holds a very special place in my heart and every time a song from "Once" is played I smile.