First post of 2012, and it's only March. Sorry folks I'll be better at this soon. I have tons and tons of stuff to share plus there are hundreds of shows coming up that will introduce me to new stuff to share, but for now expect random posts every now and then. 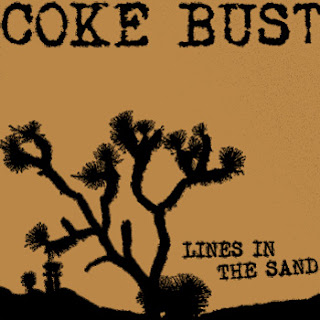 So far it seems that my year always starts off with a hardcore show, and 2012's first show was a banger! The Boston area had a violent visit by DC's straight edge hardcore band Coke Bust. They annihilated a tiny recording studio with their in-your-face, super fast and furious force of hardcore mastery. Each song was either a short burst of rebellion, an unrelenting blast of punk noise, an anthem of chugging thrash infused hardcore, a slower fist pounder or a combination of all that and everything raw & brazen. The vocalist spits loud voiced political & social anger at all who agree or disagree. All throughout the show, the energy was unbelievable, no part of the room was safe from the pit that ensued. Even on recording, Coke Bust's intensity is conveyed! I picked up their "Lines In The Sand" full length at the show, it's 30 satisfying minutes of abrasive hardcore that doesn't let up! Check it out!

Email ThisBlogThis!Share to TwitterShare to FacebookShare to Pinterest
Labels: hardcore, US