Nope, I'm not posting another Beerhead track! Yet I'm posting a Beerhead track! What's going on!? Actually, it turns out there was another band called Beerhead from Poland that was active around the same time as the other Beerhead. As a lover of novelties and multiple bands with the same name, I had to get this. Here's a selection for you! 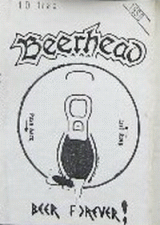 This Beerhead is a lo-fi poorly produced thrash obscurity with beer/alcohol themes. Nothing about this band is meant to be taken seriously or analyzed in detail, this is just sloppy but enjoyable thrash metal. The guitars sound raw & thickly chunky, simple and to the point. The melodies & solos here aren't exactly the most thought out or composed, but they really shouldn't be. Vocals are monotonously death-raspy, sounding like a grumpy old dude who just stubbed his toe. One can easily tell that this was recorded on a tape deck with the most minimalist of equipment, almost on purpose. That said every aspect of their sound can be easily heard, though it is muddy & crackly. In reality that's what thrash should be, ugly & muddy. Basically the precursor to pizza thrash! This description may or may not convince folk to check this out, but really it's a fun listen. Check it out!

Beerhead - Beerlover
Posted by boblovesmusic at 10:18:00 AM