Last Monday I finally sucked it up and went to see Dream Theater live. In the beginning of my love of metal, Dream Theater was among my favorite bands. I wouldn't call myself a super die hard John Petrucci is the end all of guitarists fan, but god damn they're fun to listen to. Their songs are catchy and anthemic as fuck, while their prog noodling makes me feel wonderfully inaduquate about my musical talents. As a result of their performance on Monday, I'm reliving my enjoyment of their over the top but infectious metal. I've also learned that they pull their shtick off brilliantly well live! 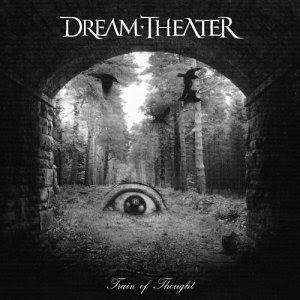 This track was a favorite of mine back in the good ol' days of my metal beginnings. I'd be hard pressed to call it one of their best, but god damn I loved it! "Endless Sacrifice" is from Train Of Thought, a bit of a transition album for Dream Theater. This album attempted to make Dream Theater's trademark heavy prog metal even heavier and crunchier. Petrucci utilizes a more modern & dare I say nu metal tone to his guitar plus groovier & darker riffs, which pairs nicely with the crisp & clear production. The songwriting definitely gets some cues from modern rock/metal bands of the time as evident by the dark intro & buildup to a chunky anthemic chorus that is impossible to get out of your head. However Dream Theater is true to their reputation, as there is at least 4 plus minutes of overindulgent skillful showing off and wankery. Jordan Rudess gets his moment to go nuts here as the rest of the song doesn't really lend itself to excessive keys. He throws in some cartoonish sounds that raise a chuckle. Again, while it's among my favorite Dream Theater songs, it may or may not convert people to their cause. That said it was good to hear it again after so many years on Monday, though admittedly it took me several moments to recognize it. I headbanged hard during the chorus!

Email ThisBlogThis!Share to TwitterShare to FacebookShare to Pinterest
Labels: progressive, US