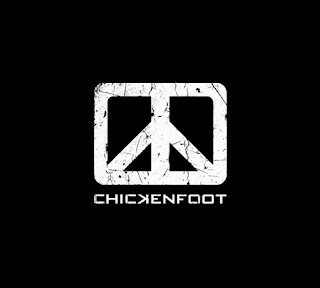 So I'm briefly interrupting the Jewish/Hanukah series to post something in honor of the New Year, New Decade, and the fact we're now in THE FUCKIN' FUTURE!!! HOLY SHIT WE'RE IN 2010 (Twenty Ten)!!! This song entitled "Future In The Past" fits with this theme quite nicely!

Anyways, this is one of the few times I've posted a mainstream/well known band haha. (ok more than a few hehe) They're not exactly the most "metal" of bands either, however they have a hard rockin' sound that I kinda lump into the metal umbrella (I'm like that!). So Joe Satriani, Chad Smith (of the Red Hot Chili Peppers), Sammy Hagar and Michael Anthony (of Van Halen) came together to form Chickenfoot, a fun band that combines a lot of the elements of their respective projects. In Chickenfoot's music you can hear Van Halen's bluesy, edgy and catchy hard rock, Joe Satriani's guitar wizardry (though he doesn't over do it), and Red Hot Chili Pepper's funk and groove. This band has got it all! This track is no exception in it's musical combinations, jumping from an introspective ballad/anthem to a funky hard rock groove to an almost middle eastern sounding passage and then back again (with pretty fluid transitions as well). I love it! It's nice to hear some good ol' hard rock done right! See what you think!

Chickenfoot - Future In The Past
Posted by boblovesmusic at 8:57:00 PM

Email ThisBlogThis!Share to TwitterShare to FacebookShare to Pinterest
Labels: Hard Rock, Metal According To Bob, US