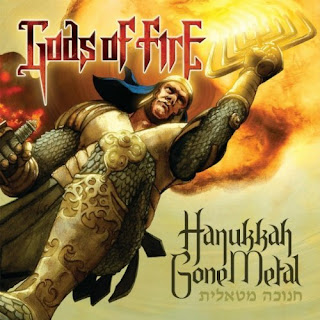 (I was going to post this on the last night of Hanukah, but it didn't happen until today, so pretend it's still Chanukah!)

Happy Hanukkah fellow metalheads, Jews and regular folk alike! It is the last night of Festival of Lights, so this means that I have one chance to post a Hanukah related metal song before the 8 day holiday ends (lolz)! Consider this a Hanukah gift to you all!

I was overjoyed when I discovered that there was a heavy metal Hanukah album! Finally the Jews had holiday metal representation! New York based traditional heavy metalists Gods Of Fire took it upon themselves to release an awesomely done Hanukah Gone Metal album. With powerful soaring vocals, melodic but kick ass guitars, full bodied organs (the part that sold me on this band), and a driving rhythm, they transform hanukah songs (both original and traditional songs) into epic heavy metal anthems. "Oh Hanukah" has never sounded more glorious! The gods of metal and Hanukah would be equally pleased! Hopefully this will please you as well!

Email ThisBlogThis!Share to TwitterShare to FacebookShare to Pinterest
Labels: Heavy Metal, US